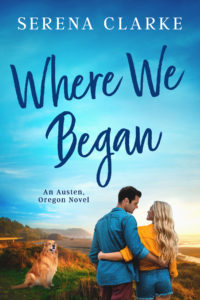 They were once-upon-a-time high school sweethearts, meant to be.
Until his dad skipped town with her mom.
End of story.

Ten years later Avery Robinson is back in tiny Austen, Oregon for her dad’s funeral, suddenly single and unemployed. The last thing she needs is for his beloved dog to develop an annoyingly heartfelt canine crush on Logan Wagner. Even if her former love does look particularly dashing playing Mr. Darcy in the local Jane Austen festival.

As sparks fly between them, the business empire Logan built from nothing suddenly feels hollow without Avery in his life. But trying to prove himself, he ends up juggling secrets that do more harm than good, and even Ace’s puppy love can’t help him regain Avery’s heart.

Pride, prejudice, and their inescapable past stand in the way of starting a new chapter together. But could a little Austen magic give them a second chance, in the place where they began?

What readers are saying about Where We Began

“I love the small town feel from this book, and the fun, quirky characters. This is a sweet and sexy book, a really fun read, and my first from this author, but not the last!” – K.L. Cassanello, Goodreads

“Super sweet story! The writing draws you in and keeps you involved throughout the whole story, I found myself in love with not only the characters but also the world that was created.” – Ashleigh, Goodreads

“Loved it! The plot engaged me with a lot of twists and turns. I pre-ordered the next book in the series. Thank you, Serena Clarke, for a relaxing escape.” – Eileen, Goodreads